The first independent job I did, before Elysian Software even existed, was a great deal of fun. At the time, I was still working full-time so this job, for Jeeves Event Solutions (now known as We Make Stuff Happen), was something of a diversion from that, back in early 2010.

It was a promotion for the DVD release of Avatar, the massively successful James Cameron film, and the plan was to build a replica of the Tree of Souls from the film on Hyde Park Corner. The “tree” would be decked in fibre-optic cable, which would constantly change colour, and the plan was to allow passers-by to access the tree and change the colour themselves. This was where I came in.

The lights themselves were controlled by an electronic light board. The bundles of fibre came in through the limbs of the tree to the board, which would automatically cycle through the colours. My job was to build a client-server interface to allow users’ colour choices to be passed on to the lighting board, using a USB-serial relay controller. Both the client and server software were written in Java, allowing messages from a web front-end to be passed through to the server and from there onwards to the lighting controller.

All of this would have been no good though if we hadn’t got some means of allowing the users to access the tree. We had a server and a wifi router hidden in the base of the tree, acting as a hotspot so people could access the lighting control website. This also provided bluetooth connectivity so people could upload photos of themselves and their friends in front of the tree, which were then displayed on a monitor mounted on the trunk.

The event itself was a great success – the tree stood for three days on Hyde Park Corner, and was used as the backdrop for an interview with Stephen Lang, who played the main villain in the film. There’s also a fun timelapse video of the actual construction of the tree. 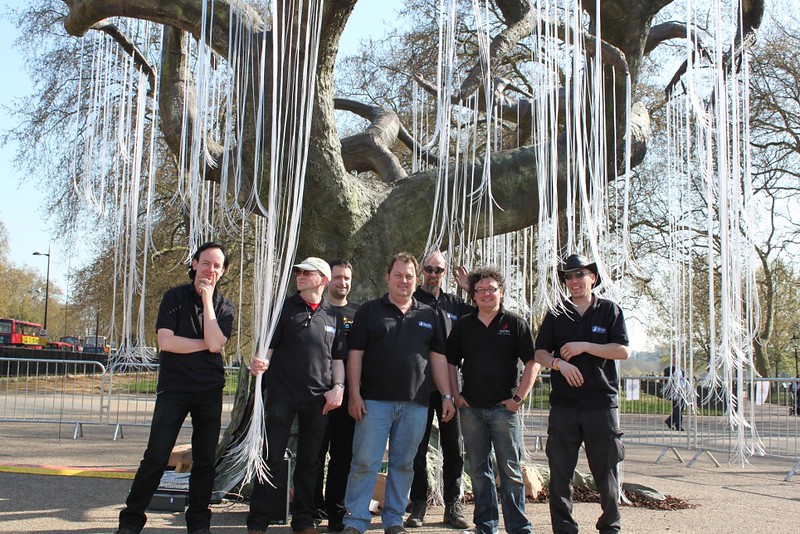